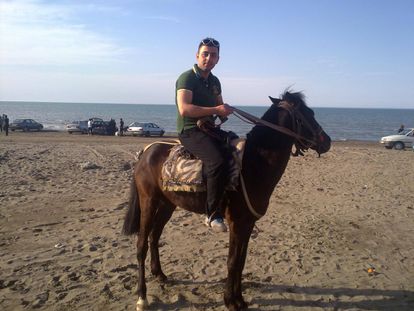 Social media hastened to dub it the “spy granny network” in an unexpected spin on the underground war waged by Israel and Iran. The Shin Bet, Israel’s counter-intelligence service, on Wednesday announced the dismantling of the plot after the arrest of four middle-aged women – three of whom already have grandchildren, as is customary in Israel, confirms Reuters – and of Iranian descent. . They are accused of obtaining information for a Tehran agent who caught them online and sent them sums of money. The husband of one of them, who helped her on a mission, was also arrested.

A handsome man named Rambod Namdar — according to pictures on his Facebook profile — contacted the four Israeli women, aged 47 to 57, via WhatsApp posing as a member of Iran’s Jewish minority who wanted to emigrate to Israel , whereas they themselves or their families had done in the past.

What began as a friendly relationship between civilians led to the systematic sending of photographs of official Israeli centers and a US diplomatic headquarters. The mastermind of the plot asked one of the women, a masseuse by profession, to photograph a naked assistant to blackmail her. He also demanded two to have their children enlist in the army’s intelligence unit upon completion of their military service.

“The espionage charge against the network made up of Israelis of Iranian descent is a mixture of serious crimes and comedic comedy,” he argues. Amos Harel, security analyst for the newspaper Haretz. “Perhaps it was due to his personal charm [de Namdar] or because the gifts and sums he sent made the recipients fall in love. But, despite the fact that they suspected that it was an attempt to capture them as spies, they all continued to maintain contact via the Internet,” argues this expert. Moreover, they accepted more commissions from the handsome Iranian Jew and received sums of up to 5,000 dollars (4,375 euros) in return.

The Shin Bet, Israel’s internal security agency, in conjunction with the Yahbal, the international investigative police squad, have filed charges with the state attorney’s office against the five detainees – whose identities remain under summary secrecy – which can lead to long prison sentences, despite the fact that none of them has managed to access national security secrets. Israeli Prime Minister Naftali Bennett took the opportunity to warn citizens to be careful with their social media contacts.

One of the detainees’ lawyers argued in front of television cameras that his client was only trying to help an Iranian who aspired to emigrate to Israel, and for this reason showed him “photographs of the country so that he can get used to it”. Among the images he sent Namdar were several images of the American Legation in Tel Aviv, the Interior Ministry and government offices and those of a shopping mall.

Join MRT to follow all the news and read without limits.

Hebrew press security analysts believe that the plot now uncovered was part of a first phase of recruiting informants in Israel, focused on simple objectives, in order to assess the capabilities of future agents. as Amos Harel assures us, “the fall of this network also confirms the growing phenomenon of the disappearance of human agents in the recruitment of informants and their replacement by virtual agents in social networks, at a time marked by the closing of borders “.

One of the women arrested, 57 years old and a resident of Bet Shemesh, a city in the province of Jerusalem, was given the mission via WhatsApp to organize a club of Israelis of Iranian origin (the Jewish community from Iran is around 70,000 people) in order to collect your personal data. It is estimated that there are still some 12,000 Jews living in Iran, who have their recognized right as a minority with representation in parliament.

The oldest detainee was also asked to infiltrate one of her sons in the army’s cyber warfare unit, which specializes in computer attacks against nuclear centers and strategic installations in Iran. Another of the women in the plot, 50 years old and a resident of Jerusalem, collaborated in the organization of acts of charity for the community of Iranian origin in Israel.

Iranian money in a suburb of Tel Aviv

A third member of the plot, a 47-year-old resident of Kfar Saba in the Tel Aviv metropolitan area, came to receive money from Namdar through an Iranian relative who had traveled to Israel to visit him. The mission of the fourth female detainee, whose age (in her forties) was not specified and who lives in Holon, a southern suburb of Tel Aviv, was the riskiest. His movements were detected by security agents from the United States diplomatic mission. This suspect maintained a relationship of digital contacts with the mastermind of the network in Tehran for several years and also tried to enlist his son in the military intelligence services. Her husband accompanied her on at least one of the prescribed spy missions.

The statement of indictment presented by the Shin Bet also records undertones of farce that have sparked grotesque comments on the Jewish state’s social media. The Bet Shemesh masseuse contacted Likud (conservative) party member Keti Shitrit, who does not hold senior positions in former Prime Minister Benjamin Netanyahu’s parliamentary group. He offered her a therapeutic massage with the aim of photographing and recording her naked. Another of those arrested has been assigned a role as an extra in the Israeli series Tehran, which revolves around the adventures of an Israeli spy in the capital of Iran.

Almost all the missions given to the networks by the valiant agent Namdar have failed and barely achieved their goal. The fall of Grandmother’s so-called spy plot now brings him closer to the failed dossier of Inspector Clouseau, jester of the litany of The pink Panther, than to the ruthless record of General Javadi, the villainous head of Iranian intelligence in the series Country.

The former minister who sold himself to the enemy

Iranian espionage has also made its mark in Israel. Former Minister Gonen Segev, who held the Energy portfolio between 1995 and 1996, was sentenced in 2019 to 11 years for spying on behalf of Iran and aiding the enemy in wartime. He was extradited to the Jewish state in 2018 after being detained in Equatorial Guinea. Segev, 65, shone as a captain in the air force, graduated as a doctor from Ben-Gurion University and in 1992 was elected as an MP. Three years later, he was appointed minister in the coalition government led by Yitzhak Rabin. He believed that the time had come to also succeed as an entrepreneur in his country. Apparently, he didn’t succeed.

Counterintelligence detected that the former minister was recruited by Iranian intelligence services in 2012 in Nigeria. He came to meet the leaders of the network on Iranian territory. He conveyed information on the Israeli energy market, the location of critical infrastructure and senior political and security officials. For this, Segev used the contacts he had in the defense and diplomatic sectors. He even tried to recruit some of his informants to join the Iranian spy network in Israel.

Disclaimer: This article is generated from the feed and is not edited by our team.