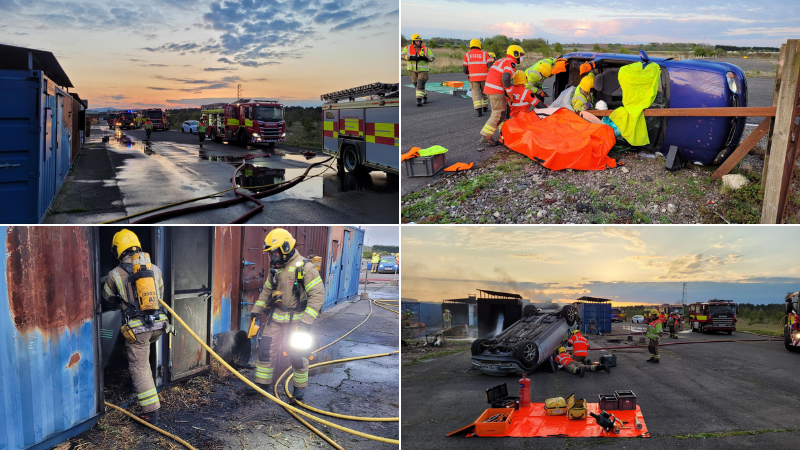 HWFRS firefighters from across Worcestershire took part in a challenging ‘command and control’ exercise at the Service’s Defford Airfield Training Center which called on a wide range of their skills and expertise.

Hosted by the Service’s Southern District, the exercise was designed to subject aircrews to a demanding scenario focusing on command and control procedures during a motor vehicle accident (RTC) and building fire, requiring the use of a respirator.

Not only was one car on its roof, but another was on its side with a metal beam penetrating the windshield, while other vehicles were also caught up in the “collision”.

Assessing the situation, the operational commander quickly established that the scene of the incident was a scrap yard with gas cylinders – and that the fire had now spread to adjacent buildings with people reported as still inside.

The first crews on the scene made rapid progress in providing immediate care to casualties, and as more fire resources arrived, crews were able to control fires and rescue casualties quickly and efficiently, while dealing with the many dangers presented by the scenario.

Throughout the exercise, a number of breathing apparatus teams were deployed to live fires while three ‘passenger rescues’ were carried out from the various vehicles involved.

“It was a challenging scenario with a number of hazards to consider, but all participating crews demonstrated a very good level of practical skill and command to bring the incident to a safe and rapid conclusion.

“I would like to thank the aircrews for taking the time to attend this exercise, as well as our training center and the district officers who organized and supervised the event so professionally.”