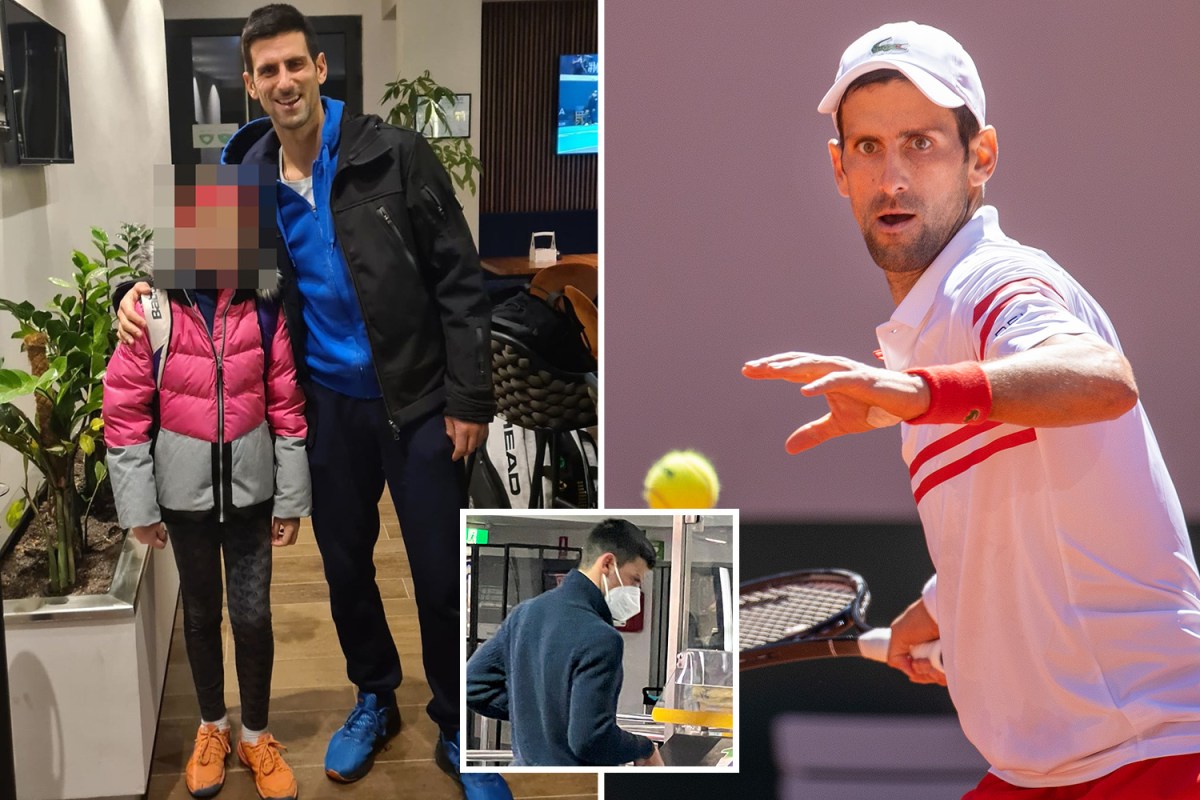 ANTI-VAX tennis star Novak Djokovic was pictured smiling while handing out awards to a group of young tennis fans AFTER testing positive for Covid.

The world number 1 tested positive on December 16 but was seen without a mask during a ceremony at the Novak Tennis Center in Belgrade, which is believed to have taken place on December 17.

Serbian Djokovic was detained at Melbourne Airport for nine hours on January 4 after landing to play at the Australian Open, and has since been forced into self-isolation in a hotel.

The nine-time Australian Open champion has sparked a major backlash after being granted a vaccine exemption to compete in the contest.

Tournament organizers first confirmed that his medical exemption was granted by two independent medical panels organized by Tennis Australia and the State of Victoria.

But Australian Border Force confirmed Djokovic’s visa was revoked after he arrived to compete at the Australian Open at around 11.15pm local time on Wednesday.

Djokovic’s request for an injunction against the cancellation of the visa was scheduled for hearing Thursday in Federal Circuit and Family Court.

His lawyers argued that he received a vaccine exemption because he had recently recovered from the virus.

But new footage appears to show the star smiling the day after his lawyers claimed he tested positive, as he was surrounded by winners.

Djokovic, who was not wearing a mask, attended the Belgrade Tennis Association event at his tennis center and posed for photos with the youngsters.

It’s unclear if the superstar took the PCR test on December 16 and got the results the same day, or if she just got her results.

He also attended a special indoor ceremony at the tennis center on December 16, to receive a stamp made in his honor.

Djokovic has not openly spoken about his vaccination status, but last year admitted he was “opposed” to vaccination.

Covid-19 infections are rising in Serbia with 9,122 new infections reported on Thursday – and 12,850 total deaths.

The country was in a ‘circuit breaker’ lockdown earlier this year following the latest figures.

And there are still rules in place on social distancing, with indoor and outdoor gatherings limited to five people.

At the same time, they introduced mandatory wearing of masks indoors and maintaining physical distancing.

His court hearing will be on Monday, and he has been forced to spend time in an infamous immigration hotel dubbed the “Alternate Place of Detention”.

He demanded a personal chef and access to a tennis court – which was reportedly denied by Australian authorities.

Djokovic has been told he will not receive any special treatment while he remains in police custody at the $109-a-night Park Hotel in Carlton, Melbourne.

He broke his silence yesterday ahead of his court hearing on Monday as his anti-vaccination row rumbles.

In an Instagram post, he wrote, “Thank you people all over the world for your continued support. I can feel it and it’s greatly appreciated.”

His wife Jelena also took the stage to applaud supporters while calling for “love and forgiveness” as tensions in the world of sport rise.

The 35-year-old wrote: “Thank you dear friends all over the world for using your voice to send love to my husband.

“The one law we should all uphold across every border is love and respect for another human being.”

Djokovic has previously been criticized for his anti-vaxx views and blatantly ignored medical advice during the global pandemic.

During the lockdown, the star openly flouted the rules as he partied with hundreds of fans in Belgrade after breaking Roger Federer’s record for most weeks as the men’s world No.1.

The star and her family watched the fireworks unfold in front of a massive crowd at their restaurant.

He was seen wearing a mask for some of the celebrations, but no social distancing measures were in place.

In 2020, he organized the controversial Adria Tour exhibition, which took place without social distancing in Belgrade and Zadar, Croatia.

Videos then surfaced of Djokovic and other players partying at a nightclub, topless.

After the far-fetched tour, where the sportsman, his wife and three others tested positive for the virus, he issued an apology.

Djokovic was criticized by Briton Andy Murray and Nick Kyrgios for the chaotic decision-making.

Folarin Balogun’s loan to Middlesbrough set to be completed this week, but Covid could delay debut