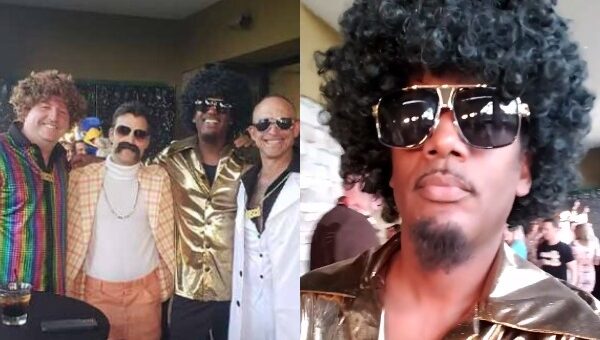 * Two white people who are said to be ‘diversity and inclusion’ advocates have falsely accused the Scottsdale Unified School District’s Hopi Elementary PTA of hiring a DJ to perform in blackface at a charity event.

It turned out that the DJ named Kim Koko Hunter, 56, was actually a black man, black business reports.

By taking, Stuart Rhodes and Jill Lassen saw a photo online of Hunter with three white men at the 70s-themed party and assumed the DJ was wearing black face.

Lassen sent an angry email to the PTA accusing them of hiring a blackface DJ.

“The DJ the Hopi PTA hire[d] was, in fact, a black man,” Hopi PTA President Megan Livengood wrote in response, according to the report. “It is insulting that you think that I or PTA condone racist behavior or encourage it by posting on social media.”

But that simple answer wasn’t enough as Rhoden, an instructor and member of Scottsdale Unified’s Equity and Inclusion Committee and Scottsdale Human Relations Commission, later insinuated that Hunter had darkened his skin for the gig.

“Let’s be clear, a black man, seemingly black-faced, is an entirely different discussion than a white person,” Rhoden wrote. “However, I did not state that the person was white. It was assumed that was my intention, and maybe it was, but nevertheless, looking on his FB page (photos below ), at the very least it looks like he’s in a darker makeup if not “Black Face” or I’m completely wrong and it’s patio lighting.

Once it was confirmed that the DJ was not performing blackface records, Lassen, co-chair of the Scottsdale Parent Council (SPC) DEI committee, apologized for the bold allegations.

Hunter also addressed the controversy on Facebook Live, saying… “Wasn’t I black enough? How do I have to be black so people know I’m a real black person.

Campaigners including the Highland Senior Citizens Network warn the outlook is ‘bleak’ as energy, fuel and food costs soar