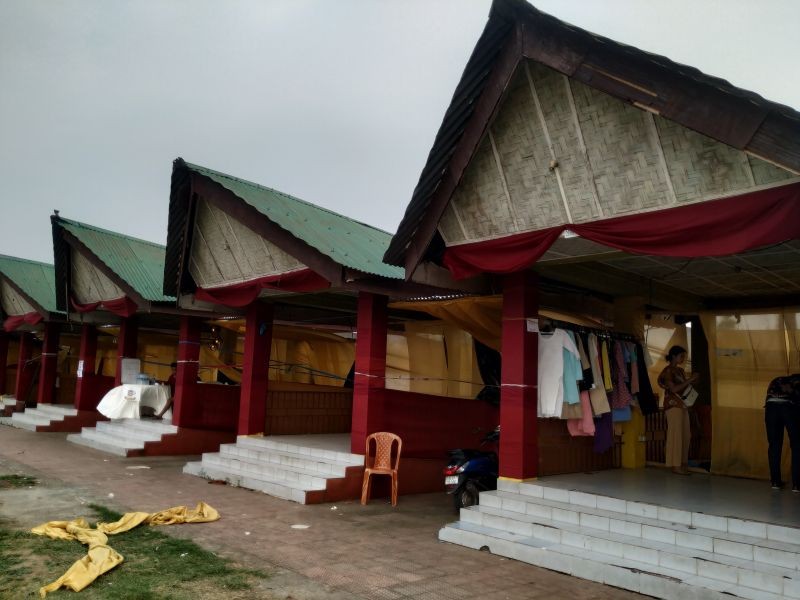 In what was seen as a noteworthy endeavor to donate relief to COVID-19 orphans, a free three-night star-studded concert hosted by the reigning Miss Nagaland, Mharoni Khüvüng was met with a lackluster response from the share of the people during the first two nights of the event.

The benefit concert had all the ingredients for success, with a star-studded line-up of singers and artists showing up to give their best performance, adequate marketing and publicity displayed across all platforms. However, barely a handful of people showed up for the show on the first two nights which took place at Urban Haat, near Dhansiri Bridge, Dimapur, from March 24-25.

Empty stalls and a handful of people could only be seen at the site. Speaking to Morung Express on day two, stall owner Sharon said she was disappointed with the way things went. “Barely 50 to 60 people showed up the first night. It was surprising given that most of the performers in attendance were so well known to people in the state,” she said.

Sharon opened a second-hand clothing stall at the site hoping a huge crowd would turn up enthusiastically. “I sell personally made clothes and earrings which range from Rs 50 to Rs 200,” she said.

But given the situation, she couldn’t sell much. Sharon shares that she also runs an online accessories store on Instagram. “Mharoni is a dear friend of mine, so I thought I could help her out by setting up a stall here,” she said.

“I think March is a bad time to organize such events because most people are busy with other obligations and activities,” she commented.

The owner of the Good Earth coffee booth also shared his experiences of the event. “The response was pretty good for me since I was running a food stand,” he said. However, he candidly admitted that the entire audience response was indeed lackluster and insensitive. But expressed optimism on the final day as it will be Saturday.

At the end of the evening of the program, Opang Jamir, a designer and model coach, also shared his thoughts on the reasons for the lack of response and said that it could be due to the non-payment of government employees’ salaries. “My cousins ​​also didn’t get four months of their salary,” he revealed. He will be among the designers who will present their collection on the last day of the event.

The second night saw a slight improvement in crowds, but organizers had to wait until 7:00 p.m. for enough people to show up at the venue. All shows were originally scheduled to start at 2 p.m.

The event is dubbed “Transformative Purpose: For the Cause of COVID-19 Orphans”, is hosted by Mharoni Khuvung, Miss Nagaland 2021 and sponsored by Liamtra, an online marketing app first created in Dimapur.

On the final day (March 26), the event will see a host of artists such as Mengu Suokhrie, Virie, J Pollnd Putland, Moko Koza, Nikato Tamang, Opang Jamir and many more.