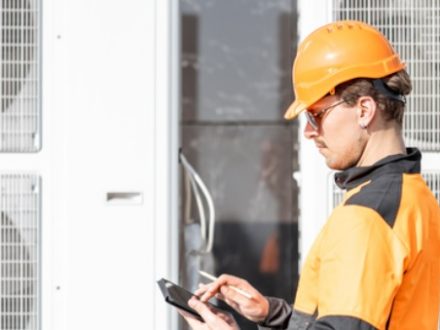 UK targets to replace natural gas boilers with heat pumps in millions of homes will not be achieved without a drastic training overhaul, warns innovation charity Nesta.

The calls were made in a new report titled “How to Scale a Highly Skilled Heat Pump Industry”.

Nesta argued in the findings that a major overhaul is needed on how best to recruit and train individuals to install 600,000 heat pumps a year from 2028, in line with government targets.

This proposed overhaul could include the introduction of a more streamlined training path for prospective engineers. The report also suggested looking at potential financial incentives for members of the public to train to become low-carbon heat engineers.

An estimated 25 million boilers running exclusively on fossil fuels will need to be replaced in UK homes by 2050. Yet there are too few installers available to meet these targets, according to Nesta.

The charity estimated that 3,000 people in the UK are currently being trained as heat pump engineers. An additional 27,000 installers are expected to be needed across the industry to meet the government’s 2028 targets. This will require between 4,000 and 6,000 people on average to be recruited as heat pump installers.

Codrina Cretu, senior Sustainable Future analyst at Nesta, said the report concluded that a shortage of trained heat pump engineers could permanently undermine the country’s legal goals of becoming a net-zero carbon economy by 2050 if it does. is not resolved.

Ms Cretu said: “We will need thousands more heat pump engineers trained every year to make real progress in delivering low carbon alternatives to gas boilers and meeting the growing demand for heat pumps. skilled installers, but that won’t happen as long as there’s a risk of engineers spending more on training than they’ll get out of it.

“UK governments should consider piloting cash incentives to entice more people and businesses to train heat pump engineers, as well as establishing direct pathways to training through apprenticeships in heating at home. low-carbon and college courses.”

A perceived lack of focus on installer skills in flagship government policies such as the delayed strategy for heat and buildings which was published last October was identified as a major concern in the report.

Nesta’s findings indicate that only a few references to training capacity were included in the UK government’s heating plan. This lack of training detail was expected to impact a range of incentives to increase the use of heat pumps.

The report states: “Policies such as the Boiler Upgrade Scheme and Home Energy Scotland provide subsidies to make heat pumps more affordable and therefore increase demand for low carbon heating. However, these policies do not address the supply of skilled labor needed to achieve settlement goals. Increasing demand for heat pumps will eventually lead to increased supply, but it won’t happen overnight.

Nesta also noted that there is no mandatory qualification or certification system for heat pump installers. He said a comparable example of certification used in other parts of the HVAC industry was the legal requirement for people installing gas boilers to be listed on the Gas Safety Register.

Failure to implement such a system was considered to lead to wide variations in the cost and quality of training heat pump engineers.

Instead of accreditation, programs such as the recently launched incentive for the Boiler Retrofit Program must be part of an MCS-certified company to qualify for funding under the program. These MCS standards are assessed by an independent certification body.

However, the costs of training heat pump installers and the price of obtaining MCS accreditation can be prohibitive, especially for the self-employed.

Nesta warned the Boiler Upgrade Scheme is only open to MCS Accredited Installers who can typically cost around £840 for initial registration with an annual renewal fee of £684.34.

The report made several recommendations to address concerns about the skills of heat pump installers. These include asking the UK government to appoint a body to manage and oversee the expansion of the low-carbon heat pump and heating sector, as well as the scaling up of a workforce. sufficiently formed work.

Colleges and training providers are also urged to work with authorities to create a direct training path for installers. These same institutions are also called upon to introduce more in-depth heat pump training modules into existing courses and learning programs to help develop low-carbon heating capabilities.

Nesta said she also recommends a review of how a cash incentive could be introduced to generate interest in heat pump installations.

One suggestion touted in the report would be to offer a payment of £5,000 to 5,000 heating engineers each year to encourage them to train to install and maintain heat pumps effectively.

Nesta argued that this projected cost of £25m a year. These costs were considered in the report as a significant reduction from the price of the boiler upgrade program.

The introduction of time-limited scholarships for heat pump engineers to ensure that they undergo continuous professional development is also supported in the report.

Manufacturers are also called upon by Nesta to become more directly involved in the training of engineers.

At the same time, the report recommends that installation companies review their hiring processes to ensure they attract a more diverse workforce and that sufficient policies are in place to retain and reward staff. qualified.