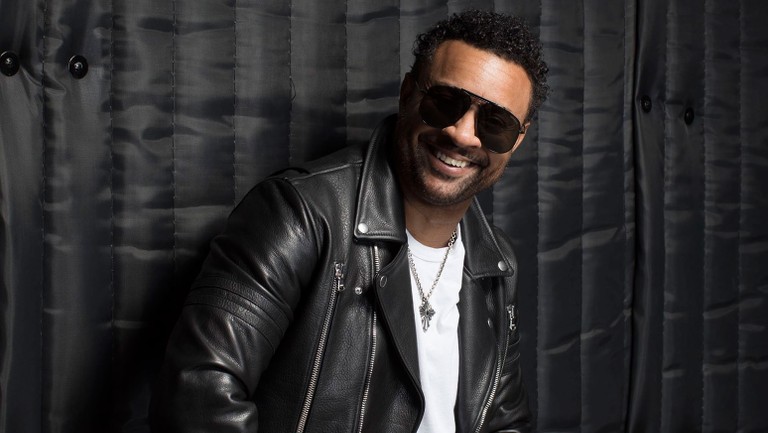 Shaggy, who takes his stage name from the “Scooby Doo” character, is a Jamaican singer best known for his transition from modern dancehall to mainstream pop.

Shaggy grew up in Kingston, and when he was 18, his family moved to Brooklyn, New York, where he attended Erasmus Hall High School and the Pratt Institute. During this time he played on Gibraltar Musik, a Jamaican-style sound system. In 1988 he enlisted in the United States Marine Corps where he served in the Gulf War as a “gun bunny”. It was while serving that he found the inspiration for his single Boumastic, one of his most popular songs, which was released on his third studio album, of the same name. The Boombastic platinum sale earned him his first Grammy in 1996 for Best Reggae Album.

Shaggy’s recording career began at the age of 20, debuting with Man A Mid Yard and Bulletproof friend, followed by Large hood and Duppy or Uglyman for producer Lloyd “Spiderman” Campbell. But her music career took a leap forward after meeting New York’s first reggae radio DJ and producer, Sting. Shaggy cut granny with Sting, and the song rose to number one on the New York reggae charts with its next single, Dedication.

Born Orville Richard Burrell in Kingston, Jamaica, success was just around the corner for Shaggy when, in 1993, he released oh carolinaa remake of an old Prince Buster classic. oh carolina became a surprise hit topping charts around the world. He became a world traveler and performed in many countries. He was also the first dancehall artist to perform in South Africa after the abolition of apartheid. His 1993 debut album, Pure Pleasure, established Shaggy as one of the most exciting new voices in reggae.

A quick and talented writer, Shaggy created a style rooted in Jamaican dance traditions, but displayed a pop sensibility and sense of humor that endeared him to ordinary music fans in the States. United and beyond.

Shaggy went on to make hits that crossed the international charts, including Why do you treat me so bad, with Grand Puba, In summer and This girl, a duet with Maxi Priest.

In 2000, he released his comeback album “Hot Shot”, which went multi-platinum in the United States. The album included two number one singles. Angel

with Rayvon and It was not me featuring RikRok, which topped the charts in Australia, Austria, the Netherlands, France, Ireland, the US and the UK.

As Shaggy prepared his follow-up album, other products hit the market in 2002: Virgin released Mr. Lover: The Best of Shaggy Vol.1a compilation covering his years on the label, while MCA released a remix album, Hot Shot Ultramix. Before the end of the year, Shaggy released their new album, Lucky day which was loosely intended as a respectful tribute to women. His first two singles, Hey sexy lady and The strength of a womandid not do well in the United States, but the album sold respectably well, going gold by the end of the year and landing in the Top 30 on the pop and R&B charts.

In 2005, he returned with Falling clothes, this time on the Geffen label. In early 2007, his pagan church single began dominating the dancehall scene thanks in part to its video featuring the legendary Ninja Man as a priest. The hit single landed on Shaggy’s album Poisoningreleased the same year.

Shaggy’s ninth album, digital only in 2011 Shaggy and his friends, saw the singer collaborate with longtime friends Rayvon and RikRok, among others. A new EP, Summer in Kingston, was released a few months later, yielding the hit single Sugar cane. Following a European release of what was essentially a refurbished Summer in Kingston called To go up, Shaggy revealed he’s collaborated with legendary producers Sly and Robbie on a new project. The resulting album, Among many, only one music came out in the summer of 2013.

The various collaborations continued over the next year, as Shaggy appeared with Kylie Minogue, Fernando Garibayand Mylène Farmer. Another high profile collaboration arrived in 2018, this time with Sting. The duo released their first single, Don’t make me wait which was on their LP 44/876. The following year, Shaggy released the solo album Wah Gwaan? !which featured guest spots from Jason Derulo, Nicki Jam, Shenseea, and others. Included on the album were the singles use me and Youfeaturing Toronto singer Alexander Stewart.

In July 2020, Shaggy celebrated the 20th anniversary of his album hot shot with the release of an updated version of the recording called Hot shot 2020. Included were reworked versions of the original tracks, among them a rendition of the hit “It Wasn’t Me” featuring Rayvon.

Shaggy continued to make musical waves in the industry. On June 11, 2021, he performed Get off Deh with Spice and Sean Paul on Good Morning American. Their performance was part of the Caesars Rewards summer concert series. The trio continued their journey and performed again on Jimmy Kimmel Live on June 15, 2021, as part of the Mercedes Benz Concert Series. Later in June Shaggy, Spice and Sean Paul performed live again and were interviewed by Wendy on The Wendy Williams Show.

In 2022, Shaggy participated in the seventh season of The Masked Singer like Team Cuddly’s “Space Bunny”. He was eliminated alongside En Vogue as Team Bad’s “Queen Cobras”.

On May 28, 2022, Shaggy received an Honorary Doctor of Fine Arts from Brown University.

Not only is Shaggy a decorated artist, but he is also known for his philanthropic works across Jamaica and the wider Caribbean. After the earthquake that devastated Haiti, he collaborated with several artists including Sean Paul, Sean Kingston and Tessanne Chin on the song will resurrect who was released to support the victims.

Shaggy is also the founder of the Jamaican charity Make A Difference Foundation, which organizes the popular annual “Shaggy and Friends Concert Fundraiser” to benefit Bustamante Hospital in Kingston, Jamaica.