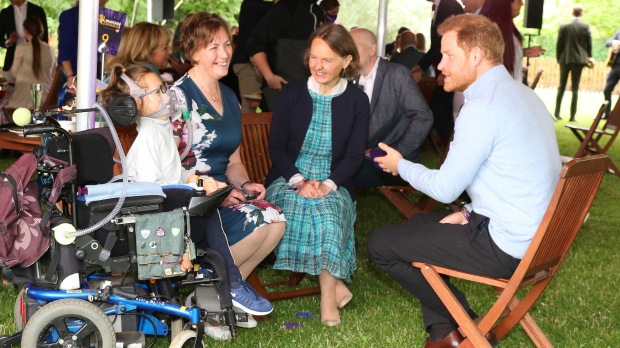 LONDON – Prince Harry made a surprise appearance at a charity event in London to meet critically ill children.

The Duke of Sussex is back in Britain and is due to join his brother Prince William to unveil a statue in honor of their late mother Princess Diana on Thursday on what would have been her 60th birthday.

Harry traveled to Kew Gardens in west London on Wednesday for an awards ceremony at WellChild, a charity of which he is the patron. He was joined at the garden party by celebrities including Ed Sheeran and Ronnie Wood.

He chatted with award-winning children and their families, and was seen telling some of those present that it was “quite a juggling act” in the face of his newborn daughter, Lilibet, and his 2 year old son, Archie.

In a statement released by WellChild, Harry said the charity has “an extraordinarily special place in my heart”.

“Now, as a father of two, I feel all the more connected, inspired and impressed by the resilience of these families, who face indescribable challenges with the support of WellChild,” he said.

Harry and his wife, Meghan, the Duchess of Sussex, stepped down from royal duties last year and the couple now live in California with their children. He last visited the UK for the funeral of his grandfather Prince Philip in April.

Harry and William commissioned their mother’s statue in 2017 to honor her legacy. The monument will be unveiled Thursday at Kensington Palace, the childhood home of the Royal Family. 5:15 PMET 06/30/21