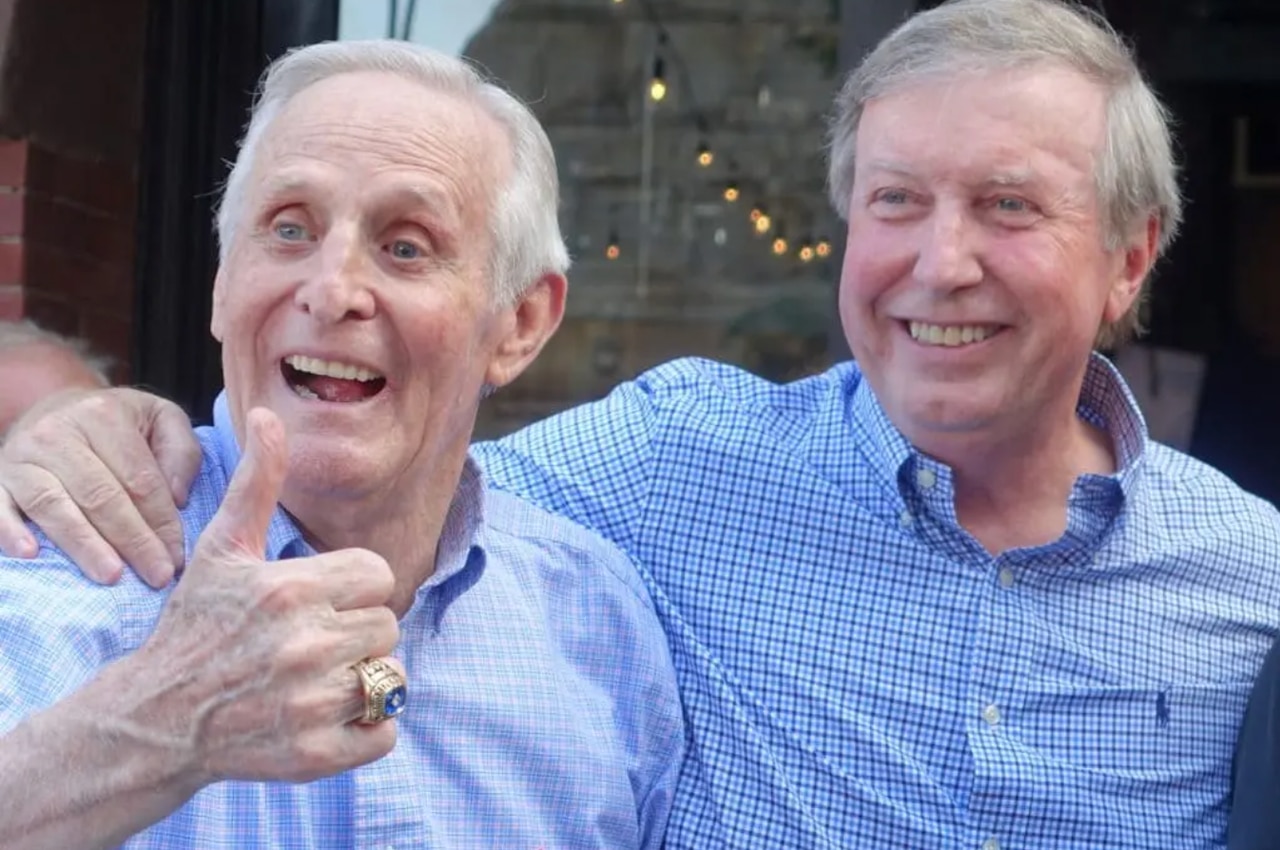 To say that 1957 was a different time in the NFL hardly does this truth justice. But it’s illustrative enough to tell how 10-year-old Ray Didinger met his childhood idol, Philadelphia Eagles rookie wide receiver Tommy McDonald.

The venue was a well-maintained training ground on the perimeter of Hershey Stadium where warehouses are now located. That been the Eagles training camp “setup” in August, Didinger recounted during our chat last week:

“It was just a big open field. People could get in their car and get out and walk up. Some people rolled out a blanket and had a picnic in the end zone.

Back by the Hershey Arena locker room door, Ray Didinger was waiting. This is where the 4th grader, who would go on to become one of the greatest professional football writers of all time, camped out. He was specifically expecting a 3rd round draft pick from Oklahoma that he read about in something called Stanley Woodward’s Football Annual. I was told it was Street and Smith’s at the time, a print magazine sold in the summer to hungry college football fans.

These days, it’s laughable that fans are ever allowed to get close to the Eagles players during their training camp at the gated NovaCare complex. In fact, the number of practices fans are even allowed to attend has steadily decreased to just a handful, with the organization even charging for attendance at these as funding for a select charity.

But that was 65 years ago. Not only were the Eagles not so popular as many people want to to attend their training camp in the sweltering heat, the NFL had yet to even take its first leap in popularity. It would come at the end of the following season with the epic 1958 overtime championship game won by the Colts against the Giants at Yankee Stadium, marveling to millions in their living rooms thanks to the new wonders of live television.

So when McDonald came out of the locker room dressed for practice, all 5-9 and 170 pounds of him, not only did he look like a regular human, but none other than the young boy visiting with his family from Philadelphia didn’t know or care much about who he was. Ray asked Tommy to sign his autograph book.

“Of course, but you’ll have to walk with me,” came the friendly reply. “Here, do you want to wear my helmet?

Young Didinger was amazed. It was so shiny and shiny and freshly painted green. He turned it over in his hands as they headed for the training ground.

Thus began what would be an unlikely, lifelong friendship, a bond between player and fan, a favor that was reciprocated many times over more than four decades later when Didinger promoted, then introduced, McDonald’s belated induction into the Pro Football Hall of Fame.

There is a remarkable kick in the story that I will not divulge. Everyone who has seen the play tommy and me can tell you. He’s had several sold-out tours in Philadelphia, Bucks County and Wilmington, Delaware since 2016.

Or you can discover yourself when Didinger’s play opens a 3-day run, August 18-20, at the Hershey Theater. Tickets went on sale Friday and can be purchased online through Ticketmaster.

About that helmet: For most of McDonald’s career, he wouldn’t have a face mask. In fact, he would be the last NFL player not to wear one (1968 as Cleveland Brown).

“He said he never wore one in high school and he never wore one in college,” Didinger said. “In the NFL, everyone [eventually] had to have one, so it had a single bar for a while. But he said it blocked his vision and he hated it. The league would grant McDonald a waiver, earned in his rookie year when the term had yet to be instituted.

As someone who became an NFL fan 10 years later than Didinger, I remember McDonald’s as an Eagle. But I vividly remember him later in his career when he teamed up with my own pro football hero, Rams quarterback Roman Gabriel, in Los Angeles. McDonald was like a ping-pong ball, bouncing off the tacklers, off the floor, off the chests of celebrating QBs after big plays. He was effervescent to the point of madness, known to punctuate TD passes by jumping impromptu into the arms of his teammates, often surprising them.

If a kid could love a player just for his style, McDonald’s would be as valid a choice as any in the late ’50s and early ’60s. And he was an Eagle for the first seven seasons of his career, bracketing the team’s 1960 NFL title during which he caught a critical pass from TD.

Those were heady days for Didinger, a born Eagles monster. The little family took a summer vacation to Hershey specifically to attend training camp. His father took meticulous notes during practice on the Cocoa Inn stationery:

“He was standing and watching practice. When he saw something, he would put his hand in his pocket and take out the pen and write it down.

“My father was that into it. He took a one-sheet list that the team printed out every day. Then he would go back to the hotel in the evening and while my mother was reading her book and I was watching TV, he would sit at the desk in our room and go through the list and draw lines over the names. It took eight weeks for the coaching staff to whittle down the roster. My dad could do it in half.

It also appears that Didinger was a born journalist. He admittedly spent every second on those walks to the training ground and back peppering his new hero McDonald with questions about his background in his native New Mexico, various career stats and everything he had learned, like a miniature Roy Firestone:

“And the nice thing was that he thought it was really funny that this little twerpy kid knew so much about him. I literally said to him once, “You know, in Oklahoma, you averaged 17 yards every time you touched the ball.” And he said, ‘I did it?’

Which shows humanity. And in the end, when we discover the rest of the story, that’s it tommy and me is all about.

I don’t think that’s necessarily lacking in today’s professional athletes, not at all. It’s just that the increased distance between the player and the fan keeps it from sprouting. Now it’s like a flower in February. He rarely has a chance.

• Nick Saban doesn’t care about college sports, only his power within his slot machine.

• How did the Big Ten football programs handle the COVID 2020 season financially? New numbers have arrived.

• The NBA has gone global in terms of talent, reach, and popularity; the viewership and MVP vote prove it.

• This “Moneyball” that made Art Howe a miserable bastard was not based on any true story.