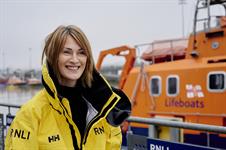 Storm Barra made its way through empty streets, shaking Christmas trees across the city and causing real waves to form on the River Ouse earlier this month. Eight miles upstream from Newhaven Lifeboat, my evening was brightened up with the good company of friends and a festive drink by the fireside of Harvey’s Tavern.

We got to know our news. I had recently spent three days at the RNLI headquarters in Poole. After gaining some experience in the role, Lifeboat’s volunteer press officers are invited to an intensive media training that deepens the challenges of the job, equipping us for best practices, especially in dealing with major incidents.

The RNLI College (in photo below) is located in the charity’s headquarters complex – an impressive array of facilities dedicated to the construction, testing, maintenance and training of the RNLI’s first-class kit and crew.

I arrived early on a Monday morning, with time for a coffee and pastry at the on-site restaurant, before settling into my accommodation – a very comfortable room, overlooking Poole Harbor. But it wasn’t a mini-break.

The four members of the media training team, half of whom I have met before, introduced themselves. The snapshot of their professional backgrounds (charity, politics, large-format newspapers, radio, television) is inspiring to say the least.

Discussions began with the topic of ethics: the responsibility associated with borrowing other people’s stories and representing them fairly.

In rapid distillation, compassion always leads. Whether it is the rescue of an isolated walker cut off by the tide, or the rescue of many people, whose tragic situation has led them to cross the Channel in ships insufficient for work; we are not here to judge.

“Corpse in front of the camera”

The course is interspersed with hands-on know-how, from social media advice to house style. The heart of our training, however, is media management, and this increases the challenge levels during the course.

My classmates and I bonded, exploring the outer limits of our comfort zones. For my part, I reached full exposure on the second day. A live TV interview role-playing game plunged me into a cul-de-sac of panic that I couldn’t get out of and led me to hide in front of the camera, in front of the whole crew.

However, trust between us grew rapidly. I was surprised that my moment of blackout was less mortifying than I expected when the clip was replayed for discussion. We were busy learning together.

With a well-placed safety message or an informative press release, I too can save lives at sea – and that, more than anything, will keep me going.

Our coaches were a skillful team, guiding us through our steps with the precision of smiling assassins. We all fell in love with their soothing, ever so sweet, fun and interactive security, igniting our cortex, pushing us into awkward places to consider the results and experience more little humiliations in the safety of the classroom.

Cleverly, they prepared us for our most difficult challenge, which culminated on the third day with a media briefing and rehearsal sessions with another LPO, in response to the latest drip newsletter – this time revealing the unfolding and tragic final twists and turns of the role-playing storyline (based on an actual event) we had been working on.

Maintaining compassion, sticking to the facts, reinforcing key messages, and answering questions is far from a walk in the park when the topic is search and rescue – or, in our scenario, drowning a child. .

A team of independent reporter-producers delivered our ultimate test with a live on-camera interview set up outside of RNLI’s waterfront headquarters. We were all experiencing the drama of the extended role-playing game. The result really mattered.

We had all come through the woods. The reading session was full of pride and applause.

The level of training we received on this course blew me away. Yes, I feel better equipped to support my Newhaven Lifeboat crew. Yes, I have gained the confidence to handle a more demanding level of media investigation. Perhaps the surprise, the supreme joy, is the value that the course has given me, as a volunteer, to recognize the difference I can make directly to the RNLI mission.

With a well-placed safety message or an informative press release, I too can save lives at sea – and that, more than anything, will keep me going.

When the worst of Storm Barra has blown the next morning, my new Whatsapp LPO band ‘Pearls & Wisdom’ rings. It’s Cal in Port Erin sharing footage of a raging shore, rising tide, and flying industrial trash cans. We share the status of our local stages and unite in the moment of rapprochement that time has provided us.

And as another Christmas of pandemic uncertainty approaches, my heart is filled with the positive force of friends and colleagues and living our common cause well.

To donate to the RNLI Christmas Appeal, visit: RNLI.org/Xmas