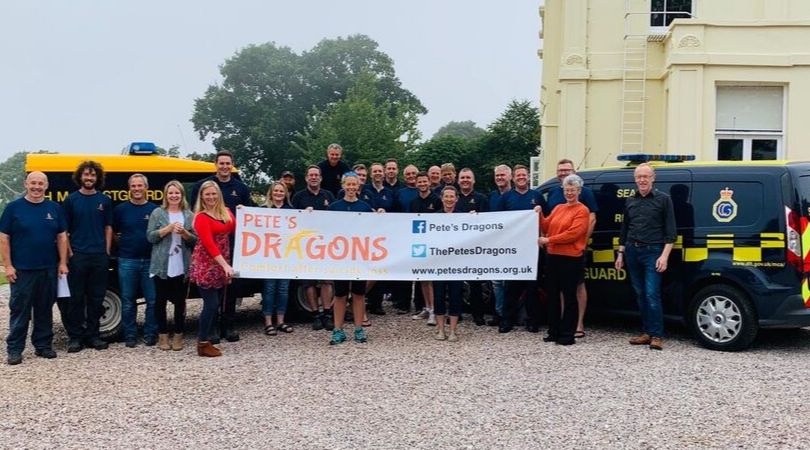 Coast Guard rescuers have received invaluable training from an Exmouth-based charity to help save people in their “darkest hour”.

Emergency service first responders – who are often confronted with those contemplating suicide – received two days of instruction from Pete’s Dragons.

This training will give those of our officers who have attended the tools to connect with people in their darkest hour, hopefully see some light – Sam Houston

The advice was given to HM Coastguard rescue teams from Exmouth, Beer, Plymouth, Torbay, Teignmouth and Berry Head.

“It’s a very sad set of circumstances that we can face on a daily basis.

“Suicide often presents itself as the only way out, however, it is a very permanent solution to a situation which, with the right help, can be only a temporary problem.

“We were very fortunate to receive ASIST training from Pete’s Dragons.

“This training will give those of our agents who have attended the tools to connect with people in their darkest hour, hopefully to see some light.

“This will give us time to put a plan in place, connecting those who need it with the right people to help them on a permanent basis.

“These skills will be invaluable for our teams both personally and professionally. “

Pete’s Dragons CEO Alison Jordan said, “We have been honored to train with the staff and volunteers of HM Coastguard, a group of dedicated and caring professionals.

“Often they find themselves the first to reach out to those who may be considering suicide.

“We are proud to have been able to add skills to their toolkit and improve their confidence around the subject, which will help increase the safety of residents of Devon.

“This training was made possible with funding from HM Treasury.

The charity currently provides tailor-made suicide mourning support to over 300 people across Devon.

It is also a market leader in suicide grief training.

National recruitment and training provider Qube Learning partners with The…

Open training session at The Kenny – this Tuesday! | New

Kelly Forrest on her passion for healthcare education