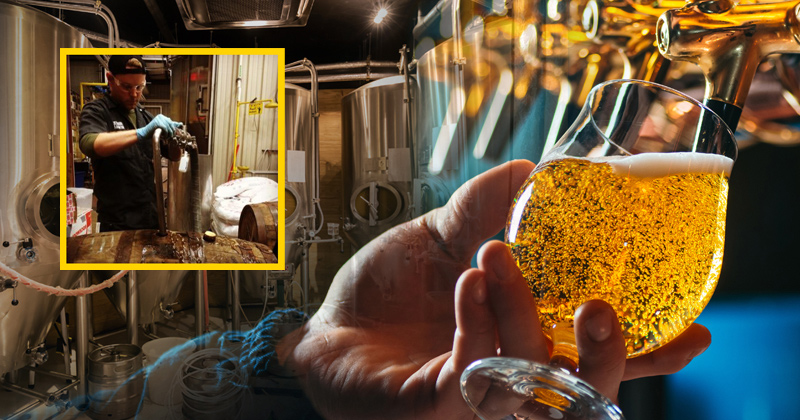 Like many people of legal drinking age, Brad Adelson bought beer on his 21st birthday; however, he didn’t – in fact couldn’t – enjoy it that day. Rather than ordering a bottle or draft from a pub or buying a six-pack or case from a store, Adelson and a friend invested in a beer brewing kit and began the multi-day brewing process. by mixing the ingredients themselves.

Adelson, who at the time was pursuing a Bachelor of Arts degree with a concentration in photography at San Jose State University, was immediately taken with brewing, which he assimilated into his major.

After spending time brewing for fun with his brother and hosting charity events with their home brew in San Diego, where he moved after graduating from San Jose State, Adelson was so hooked on brewing. art and science of brewing that he went back to school. and earned a second undergraduate degree in Food Science and Technology at Oregon State University. He supplemented his classroom education with a practical internship at the Ironfire Brewing Company in Temecula, Calif., and hasn’t looked back.

“The Ironfire people were super nice,” Adelson said. “They let me hang out and brew with them. I learned a lot and basically got paid in beer. It was great.”

For more than 15 years, Adelson worked at various breweries across the country, including Founders Brewing Company in Grand Rapids, Michigan, Victory Brewing Company in Downingtown, Pennsylvania, and 1937 Brewing Company at Delaware Park in Wilmington. Currently a master brewer for Lost Planet Brewing Company in Royersford, Pennsylvania, he will share his experience, expertise and passion by leading the new Foundations of Brewing Science and Brewery Operations program in the Division of Professional and Continuing Studies (UD PCS) at the University. ‘University of Delaware.

The program is designed to give participants looking to enter the rapidly growing beer industry, or transitional positions within it, practical knowledge and hands-on experience to give them an edge when they are looking for jobs in the brewery. The Foundations of Brewing Science and Brewery Operations course runs live online from 7-9 p.m. Wednesdays for 10 weeks starting September 14. Adelson said the course will be an eye-opener for anyone who enrolls.

“People are amazed to learn how much attention to detail and quality goes into beer brewing and how complex the process is,” Adelson said. “I’ve had people tell me they’re shocked to learn that when they order a beer, we don’t make it at the time. It takes two weeks to a month before we can benefit.

According to the Brewers Association, the record high of 9,118 craft breweries in the United States in 2021 represented a 60% increase from 2016, when there were just 5,713 craft breweries in the country. Adelson attributes this growth to good marketing, quality beer and a nationwide trend to buy local. With the rise of craft breweries showing no signs of slowing down, skilled brewers are in high demand.

“We’re going to cover the brewing process from start to finish,” Adelson said. “The biggest goal is for the participants to learn what they need to be able to show any future boss that they have a pretty good basic knowledge of beer. I thought if I was going to hire someone who didn’t need a lot of training, what do I wish he knew.”

The course also offers amateurs the opportunity to improve their shuffling game.

“If you’ve been brewing at home for a while and you’re very passionate, even if you don’t want to get into the industry, but maybe you’re looking to scale up your home brewing operation, that’s a great tool for anyone looking to do that,” Adelson said.

Whether attendees are looking to make brewing a full-time or part-time career, change roles at a brewery, take their hobby to the next level, or simply expand their knowledge, they will be invited to attend a optional in-person session at 1937 Brewing Company, where they will learn the practical and hands-on aspects of the role and familiarize themselves with the brewery space. Scheduled for October 15, from 10 a.m. to 1 p.m., the in-person session includes an optional instructor-led beer tasting, during which attendees will be responsible for the cost of their beer. Attendance at the in-person session and participation in the beer tasting are not required to complete the program.

Participants in the University of Delaware Foundations of Brewing Science and Brewery Operations program must be 21 years of age or older. Enrollment in the initial program is offered at a special introductory price of $995, which is $500 less than the regular price. For more information, visit pcs.udel.edu/brewing, email [email protected], or call 302-831-7600.